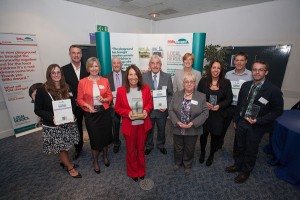 The continued hard work of the congregation in their Makeover Project – Forward for Jesus has been recognised by the award of a prestigious prize in the 2013 Biffa Award Event held in Birmingham on 24th September.

Biffa Award was the first main grant supporters at the start of the project two years ago and contributed a most generous £50,000 towards the over £120,000 cost of replacing the boilers and installation of the new heating systems. Having visited the church earlier in the year to see how the work had turned out, Irene Greenwood, Grants Officer at Biffa Award, was so impressed by the care taken in conservation of the very best features of our property, and just bowled over by the enormous team effort of all involved in the project,that she suggested we enter our scheme for a prize in the 2013 Biffa Awards Event in the Community Buildings Category.

A prize of £2,000 awaited the winnder of the category section and we were just thrilled when we learned, following a visit in the summer by Mavis Wilkins, the independent judge, that we had made the final 4 on the short leet. 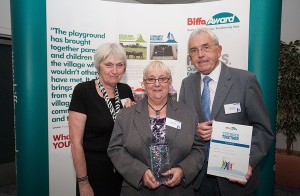 Janette Black (Social Convener) and Douglas Graham (Property Convener) headed for Birmingham on 24th September to be present at the lunch and Awards Event and were delighted when Mavis recommended Dalziel St. Andrew’s as Category Winner.

Having been asked on what we might spend any winning prize money we mentioned the much needed induction loop for the small hall which can now go ahead.

Again thanks to all for their continued support in our Project and also thanks to Biffa Award for this wonderful support and prize.

A huge added bonus is the further £50,000 which Biffa Award has contributed to our upgrade of kitchen and installation of 30 smoke detection points throughout the buildings in our most recent phase of works.