the condition of the property and to prepare the suite of buildings to enable our Lord to be served by this and future generations.

Areas which had been identified as requiring attention included:

At the outset it was essential to ensure congregational support for what was inevitably going to be a costly and lengthy upgrade.

Following a full consultation which showed overwhelming support for the proposals, and support from our prayer groups, it was agreed to embark on our Makeover Project – Forward for Jesus.

An incremental approach to the range of tasks that lay ahead, would be adopted. An overriding aim was to undertake the work without incurring debt. 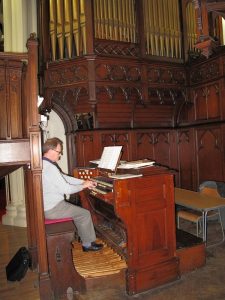 The Organ restoration was carried out in 2 phases (with expert consultancy provided by James Mackenzie and Matthew Hynes). A competitive tendering process was followed with the successful contractor appointed being G E Walcker & Sons of Germany (the Organ is a Walcker Opus 876 Organ having been supplied and installed in 1900 by Walcker & Sons!)

Following advice from Hamilton Presbytery Property Adviser and The General Trustees a conservation architect (LBG Waterston of Bothwell) was appointed, after a competitive process, to guide and assist us in the building works to the property and the following contracts were successfully arranged and completed.

Sanctuary overhaul (worship took place in the large hall for 12 weeks while work was undertaken):

In addition further contracts were then prepared and awarded for the following supplementary works:

During the course of the roof overhaul contract, the contractor identified a major wet and dry rot outbreak around the full wall head area of the sanctuary. In addition, several roof areas were found to be affected by nail sickness and required re-slating.

The contract had to be urgently amended to address these areas of work with external stonework dressing excluded at this time.

Work was carried out to improve external access at the manse and upgrade of a downstairs WC area carried out.

The brick-built gas housing shed had deteriorated to such an extent that it had to be demolished and a new shed cover erected.

The weathered condition of the upper floor window areas in the sanctuary was tackled with ventilated poly-carbonate sheeting added as additional protection.

The contract to repair the upper floor window encompassed the proposal to do likewise to the large feature window which is located over the front entrance doors. Close inspection, however, revealed that this window was affected by cracking in the stonework which the conservation architect advised required a full replacement of the window, complete with all re-glazing, rather than a repair.

To allow an online reach out to the Deaf Community a 4th dedicated camera was added together with a new screen which shows all words spoken and as recorded weekly by an electronic note taker.

The aggregate cost of all works exceeded £1.25m with work carried out, over the years, in a series of contacts, each secured by competitive process, and overseen by Mr George Waterston of LBG Waterson, together with assistance from RC Brown, quantity surveyors.

With the stated objective of securing the completion of the Makeover Project – Forward for Jesus, free of residual debt, it was so encouraging to secure funding support throughout the project from the congregation with financial donations augmented by funds raised over several years from special events and, for a time, weekly sales of cakes, jams, sweets etc, at a “Makeover Table”.

It would not, however, have been possible to undertake work on this scale without grant funding assistance. The congregation fully acknowledge the excellent support provided by the following organisations. It should be noted, that several of these organisations provided support on more than one occasion.

For the organ restoration from;

For the remaining building contracts support from;

And, for the Deaf Outreach Initiative expenditure support from;

It is so very difficult to name all who ought to be thanked for their support.